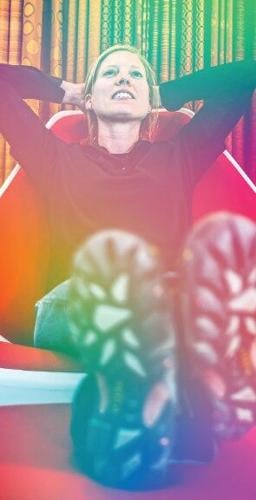 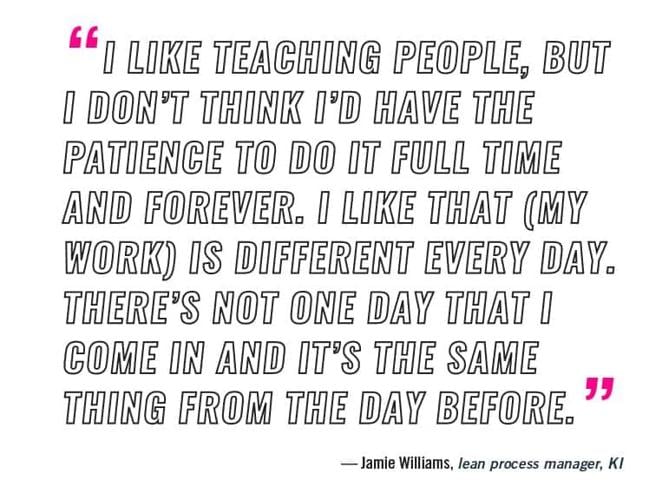 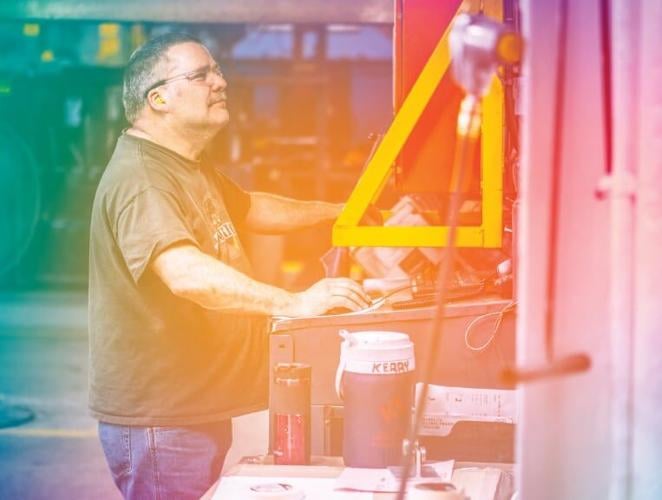 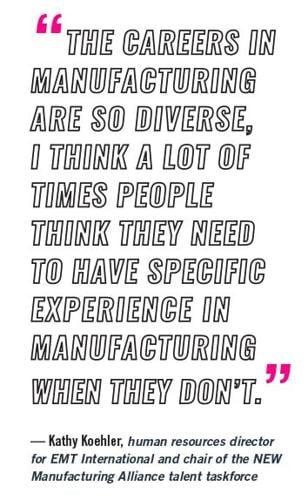 Jamie Williams selected her career when she was in elementary school.

As a girl, she would play school, even asking her teachers for extra worksheets to take home. As a high schooler, she loved children and spent her evenings babysitting. It was a natural, then, that she started her academic career in the University of Wisconsin-Oshkosh elementary education program.

Williams did what many college students do to earn money for school and took a job with a company hiring summer labor. Her first summer working for Green Bay furniture manufacturer KI was unremarkable. She worked in the painting department — not bad for a day’s work, but not life-altering.

She embarked on her freshman year at UWO in 2003 and returned to KI for another summer, and this time, the experience was life-altering. That summer, she was assigned to a different role, one that would make her view manufacturing with new appreciation.

Williams worked within a cell at the Green Bay headquarters — an area devoted to assembling a specific piece of furniture. She developed a new appreciation for the atmosphere at KI. What really influenced her, though, was her female boss. Manufacturing may be a male-dominated profession, Williams says, but her boss provided an example of a successful, vibrant, happy woman working in the field.

As someone who chose her career before she was 10, Williams had never considered anything else, and certainly not manufacturing, but that changed.

“I didn’t know exactly what I wanted to do, but I knew I liked what my boss did, and I got the hang of being a leader in that cell,” she says.

That year when Williams went back to school, she changed her major to supply chain and operations management. When she returned to KI for a third summer, people in her area began to look to Williams as a resource.

Williams returned to KI for an internship, where she oversaw her own cell. As she began her final year of school, a process manager announced his retirement, and Williams applied and was hired. A semester shy of earning her degree, she worked second shift, full time and took one class a semester, graduating in 2009. KI was flexible and supportive while she was finishing her schooling, Williams says, allowing her time off when she needed it.

Williams, now 33 and a lean process manager at KI, transitioned to first shift in 2013, and these days she does get to educate, but not in the way she’d first envisioned. She teaches her own three kids in many ways as well as training the many people who have reported to her over the years. Her career at KI offers her a variety she likes.

“I like teaching people, but I don’t think I’d have the patience to do it full time and forever,” she says. “I like that (my work) is different every day. There’s not one day that I come in and it’s the same thing from the day before.”

Inarguably, there will always be a need for people in every profession, including teaching, social sciences and

manufacturing, especially in Northeast Wisconsin. Many in Williams’ generation, however, pursued degrees in oversaturated fields such as sociology and psychology, says Jim Golembeski, executive director of the Bay Area Workforce Development Board.

All good news so far, but here’s the bad. The percentage of students pursuing STEM-related degrees — engineering, IT, math and science — remained relatively flat between 1975 and 2009. Just 16.4 percent, 16.8 percent and 15.9 percent of boomers, Gen Xers and millennials, respectively, pursued degrees in those fields, according to the Deloitte article.

Thus, a mismatch was born.

Millennials missed the STEM education revolution, and their learning skewed toward social sciences rather than hard sciences, Golembeski says.

“I think that’s the millennials’ experience,” he says. “They got educated on one side of the divide and thrown out on the other.”

The post-recession world is focused heavily on STEM skills, and many from the millennial generation — those born between approximately 1981 and 1997 — got caught in the middle of a phenomenon we didn’t predict, Golembeski says.

While the K-12 education system is doing a much better job in terms of STEM education, career planning and connecting with employers, that doesn’t help the generation that missed out. Complicating matters, many millennials took on large amounts of student debt and haven’t found careers that have justified the investment.

“Of course, everybody wants the millennials because they are a numerically large group,” Golembeski says.

In fact, millennials have overtaken boomers as the largest living generation, numbering 75.4 million. Employers need millennials and millennials need jobs, but how to connect them?

Kathy Koehler, human resources director for EMT International and chair of the NEW Manufacturing Alliance talent taskforce, says people may not realize they already have skills applicable to manufacturing careers.

Many can come into a manufacturing role with similar experience and pick up the skills they need on the job. EMTalso provides tuition reimbursement, whether employees want to earn a degree or simply pick up some classes.

For those wanting to embark on a new career path in manufacturing, technical colleges offer abundant options.

opportunities and excellent benefits, including tuition reimbursement in

many cases. Many households struggle financially, and education coupled with

of manufacturing and engineering at Lakeshore Technical College.

Students entering a technical college program with a bachelor’s degree can apply many of their credits to a degree, meaning most already will have completed the general education requirements. Many colleges also will give credits based on prior learning. Furthermore, technical colleges offer flexible options such as part-time or online learning, Schetter says.

“Many times, it’s not all lost,” Schetter says. “It’s just, ‘How do I take what I have and turn it into something different?’”

Even without a technical degree, someone could start on the shop floor at a manufacturer and build their way up. Most manufacturers are willing to offer a flexible schedule and pay for the skills they need, Schetter says.

Switching to a manufacturing career is all about learning to apply skills in a different setting, says Peter Vanden Heuvel, human resources manager for Green Bay-based Fox Valley Metal-Tech Inc.

That’s just what one of the company’s employees did. He had graduated with a mathematics degree from St.

Norbert College and struggled to find work. He took a job with Fox Valley Metal-Tech and has since progressed in his career there and found he enjoys working in manufacturing.

While someone doesn’t need to have a degree to work in manufacturing, Vanden Heuvel says having a two- or four-year degree can provide a ticket to career growth, so that prior education, even if in an unrelated area, isn’t for naught.

Vanden Heuvel says he wishes more people knew about the benefits of working in manufacturing. Fox Valley Metal-Tech provides tuition reimbursement, encourages employee growth and provides a clean, organized, well-lit environment with air conditioning in the summer and heat in the winter.

“It’s looked at as dark and dirty and not inventive, but that is so not the fact at all,” she says. “There’s so many aspects of manufacturing. It is different every day. You’re using your brain if you want to.”