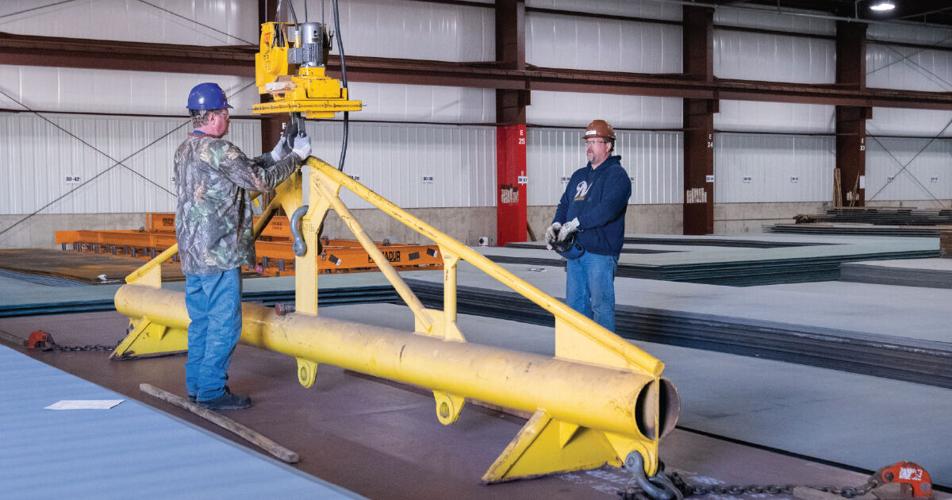 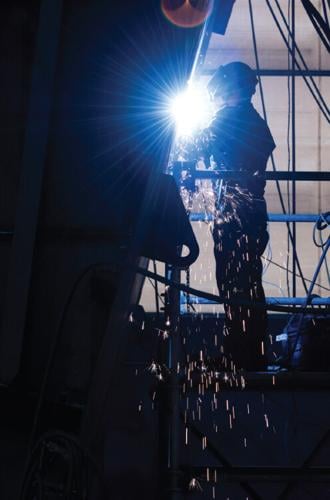 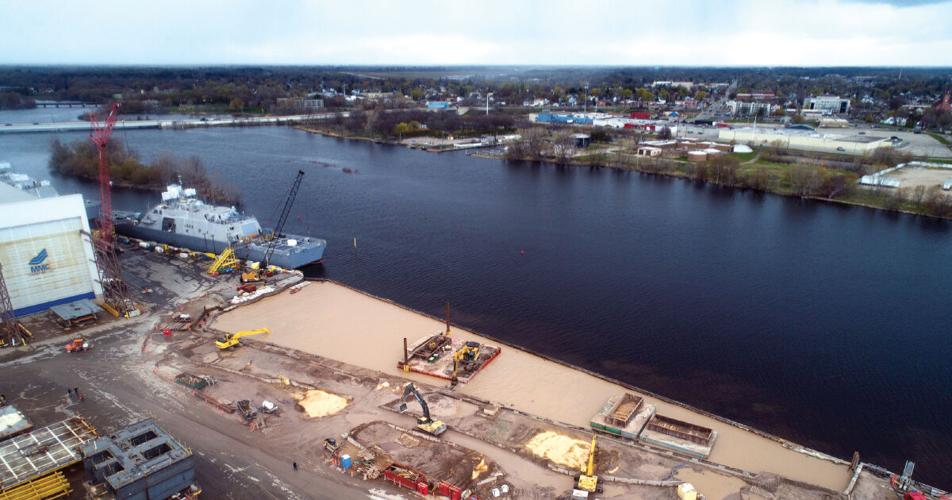 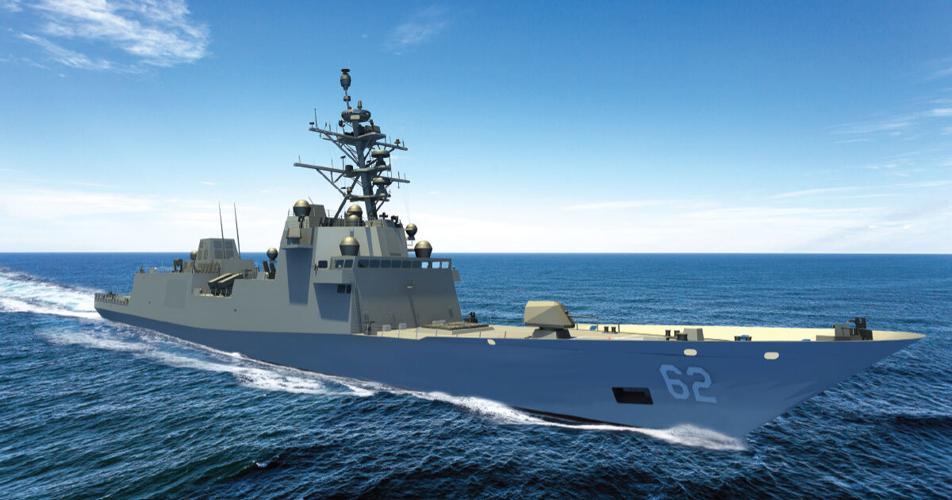 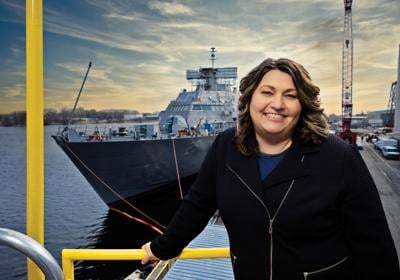 Driving toward the Menominee River in downtown Marinette, you cannot miss the Fincantieri Marinette Marine shipyard, with its numerous buildings and construction cranes looming over the site — not to mention three littoral combat ships sitting in the river where they’re being finished.

The shipyard is about to get a lot busier and more prominent as the company adds a massive new building and ship lift as it prepares to build the Constellation-class frigate for the U.S. Navy. Costing more than $800 million each, the frigate is transformational not just for the shipbuilder but the region as well.

If the Navy exercises the complete contract for 10 frigates, the deal will be worth more than $5.5 billion and will keep the shipyard busy for more than a decade, says FMM CEO Jan Allman.

“The FFG program will grow the yard and sustain the workforce for many, many years to come. It’s also important to our community, Wisconsin and Upper Michigan,” she says. “We’re very proud to win this contract. It’s exciting.”

As FMM works on the engineering for the frigate and constructs buildings to manufacture and assemble the new ships, it’s still in the process of completing its Navy contracts for the LCS and the multi-mission surface combatant.

The frigate deal is projected to create thousands of direct and indirect jobs. Currently, Fincantieri employs more than 2,200 workers across its Northeast Wisconsin shipyards — FMM, ACE Marine in Green Bay and Bay Shipbuilding in Sturgeon Bay. The company expects to add 1,000 workers across the shipyards as work begins on the frigate.

Fincantieri is pouring $200 million into the capital expansions of its shipyards in Wisconsin to prepare them to build the frigate, which is almost twice the tonnage of the LCS. That expansion, along with the building of the frigate, is transforming the local economy.

“FMM is a huge employer, has a big footprint in the community and is a massive job generator,” says Marinette Mayor Steve Genisot. “There really is a trickle-down effect happening since all of those businesses that serve the FMM workers are seeing more customers.”

FMM was one of five companies vying for the frigate contract, a process that took more than two years. The frigate is modeled after the Italian FREMM (European multi-purpose frigate), which Fincantieri built in Europe. The Marinette shipyard is scheduled to deliver the first FFG in 2026. The goal is to begin bending steel for the new ship by the end of this year.

The FFG is a multi-role surface combatant with built-in capability to conduct air defense, anti-submarine warfare and surface warfare operations, including room for a vertical launch missile system. For the U.S. Navy, the frigate is a follow-on to the modular LCS.

The Marinette shipyard is a bustling grounds with employees and equipment moving from place to place. Construction crews brought in to work on new buildings and modify current buildings just add to the breakneck pace. The shipyard operates 365 days a year as employees work on the various projects in climate-controlled buildings.

Standing over a 3-D diagram of how the Marinette shipyard will look once its construction projects are finished, Allman points out the additions and changes, including Building 34 — an enclosed fabrication facility that will become the shipyard’s biggest building and is massive enough that two frigates can undergo construction at the same time.

“It’s so large, it can hold two football fields and a marching band in between,” Allman says.

The shipyard’s other major addition, a Syncrolift that lowers a ship like an elevator gradually into the water at launch, brings another big change. Since the new ship won’t need to be launched on its side, more of its construction can be completed inside a building with a climate-controlled environment. (While launching a ship on its side is exciting to watch, Allman says it does require more work to be completed outside.)

The Syncrolift also places FMM among the top seven Navy shipyards in the country, she continues. “It will be one of the largest Syncrolifts in the nation.”

In 2020, the company received a $29 million grant from the Wisconsin Department of Transportation’s Harbor Assistance Program to help with dredging work to facilitate the construction of larger ships and for the vertical ship launch. Prior to this award, the largest grant the program had given was $7.1 million.

Mayor Genisot says the construction work being done at the Marinette yard has brought in a lot of workers and contractors and that influx is just a taste of what the community can expect once work begins on the frigate.

“The growth and expansion in the yard already have people working here, and as they finish up work on the new building and Syncrolift, they’ll be hiring and bringing in contractors to build the frigate,” he says. “FMM has a huge impact on our community and region.”

ACE Marine in Green Bay makes aluminum modules for the LCSs, shipping them north to Marinette.

“We have a collaborative system-of-yards approach that leverages the talent and capabilities across the three Wisconsin facilities,” Allman says.

Changes are not only taking place in Marinette’s yard. Fincantieri’s shipyard in Sturgeon Bay expanded into an area formerly owned by Palmer Johnson Yachts. The space will be used as a hub for government work, including the LCS and FFG. To accommodate the FFG project, a new 84,000-square-foot building measuring in at 110 feet tall is under construction, and an existing building off the dead end of North First Avenue is undergoing a 68,000-square-foot expansion and will be used for blasting, priming and molding steel components.

“Those two buildings are mimicking some of what we are doing here as the modules are made and put together. By utilizing the space in Sturgeon Bay, we will be able to make two frigates a year,” Allman says. “We’re leveraging our system of shipyards to build the FFG(X) and will put in $200 million across the enterprise so we can build these ships.”

Founded in 1942 as the nation sought more ships to fight in World War II, the shipyard was privately owned until 2000 when the Manitowoc Co. purchased the company. In 2008, Manitowoc divested its marine interests and sold the Marinette shipyard to Fincantieri.

Before the Marinette shipyard landed the LCS contract in 2006, it went through a feast-and-famine cycle. Winning a contract, the company would quickly add employees only to lay them off when the project was done.

“Another reason the FFG contract is so important is that we were out of projects once the MMSC work was done in a couple of years. We now have a program that could last two decades,” Allman says.

Since Fincantieri purchased FMM, it has invested more than $180 million in the shipyard, transforming it into a modern facility with cutting-edge, computer-controlled manufacturing equipment with heavy-lift capabilities. Several small buildings in the shipyard were replaced with large, modern buildings, allowing FMM to make larger vessels. With the contract for the massive frigate, the yard is expanding again.

Another differentiator with the FFG construction is that FMM is the project’s main contractor on the project, Allman says. With the LCS and the MMSC, FMM is a subcontractor to Lockheed Martin. Being the main contractor will open the shipyard to future contracts and it won’t need to rely on another company to win a bid.

For Allman, who became CEO in 2014 after a career in the automobile industry, coming to work each day and watching the progress on both the shipyard and ships and seeing its impact on the surrounding communities is awe-inspiring.

“The impact goes beyond our employees here, but also to our suppliers. For the FFG, we will have approximately 200 Wisconsin and 50 Michigan suppliers that we’ll spend an estimated $515 million with,” she says.

For the LCS and MMSC contracts, Wisconsin and Michigan suppliers were paid $1.4 billion and $500 million, respectively.

“That strong supplier base locally and in the region helps grow the local economy,” says Meridith Jaeger, Northeast Wisconsin Technical College’s dean of corporate training and economic development. NWTC is a training partner for the shipbuilder.

In addition to its employees and suppliers, FMM’s impact is visible as other people come to the region “since they see it as a growing area,” Jaeger says.

Since winning the LCS contract, FMM has expanded its workforce to meet the production demand. Now with the frigate coming on board, still more workers are needed.

After winning the LCS contract, FMM worked with NWTC to open the North Coast Marine Manufacturing Training Center in 2011. Located near the shipyard, it’s FMM’s primary training partner in addition to working with the shipbuilder’s contractors as well as other shipbuilders.

With all three Fincantieri shipyards in Northeast Wisconsin working on various parts of the frigate, it creates a wider pool of workers the company can pull from, Allman says. Between employees, subcontractors and project partners, an estimated 3,300 workers will be in the three shipyards on a daily basis.

“We estimate we’ll impact 16,000 indirect jobs, such as subcontractors and partners, and about 9,600 induced jobs from services and spending our employees make in the community,” she says. “Local hotels, for example, are busy, and the same goes for restaurants where employees or contractors may go.”

Jaeger says the North Coast Marine Manufacturing Training Center has doubled its staff over the past year as it plans to meet the increased demand for its services as well as future needs.

“We’ve made capital expenditures as well. We expanded our welding lab last fall and renovated classrooms at both the center and the NWTC campus in Marinette,” she says, adding the center offers both soft-skills training and technical training, including electrical work, ship fitting and welding classes designed for ships.

• Delivered six of 10 ships to the U.S. Navy; six remaining ships at various stages of construction

• Manufacturing four for the U.S. Navy

• Final MMSC slated for delivery in 2025

• Finishing detail design of lead ship for the U.S. Navy

• Construction to begin later this year

What it does: Builds warships for the U.S. Navy

Employees: 2,200 at all three Fincantieri shipyards in Northeast Wisconsin