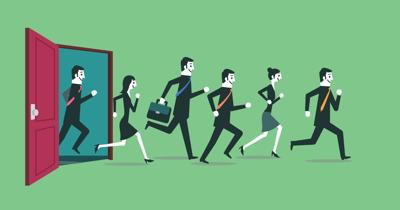 As businesses struggle to bring new workers into the fold, they face another challenge: keeping the workers they already have.

Today’s workforce is on the move. According to a recent PricewaterhouseCoopers survey, 65 percent of responding employees say they are looking for a new job. Called the Great Resignation by economists and fueled by the pandemic, people are leaving their jobs for a more fulfilling or flexible position even if they don’t have another job lined up.

“Let’s be real. The pandemic led more people to take a closer look at their life and what they’re doing,” says Bill Marklein, founder of Employ Humanity in Plymouth. “More people are thinking, ‘How does my work fit into what I want?’”

If that wasn’t enough to contend with, large numbers of baby boomers are also retiring. An estimated 10,000 boomers retire each day in the United States — which was accelerated by the pandemic as some workers decided it was time to step away. In 2020, it is estimated that an additional 1 million baby boomers entered retirement due to the pandemic.

“COVID is concerning for many individuals, but for those with underlying health issues with customer-facing positions, it is a heightened worry and has resulted in some individuals stepping into retirement earlier than they otherwise may have to protect their personal health and well-being,” says Julia Johnson, director of talent management consulting for Wipfli. “The labor shortage has already created disruption in the workplace.”

“The boomer generation was followed by the much smaller Generation X, causing pressures on the availability of workers as early as 2012, according to some resources. Each passing year is causing employers to feel the intensified pressure of that labor shortage,” she says. “Finding and retaining good workers is challenging. The labor shortage isn’t going away anytime soon. Projections indicate that we will continue to experience labor shortages for at least the next 10 to 15 years.”

So, what can employers do to keep the employees they have while also looking to add new ones?

Marklein says one way to keep workers from leaving is to embrace employee development programs.

“The programs shouldn’t just be about learning new skills to advance in the workplace, although those are good. They also need to take a holistic approach,” he says. “Perhaps offer some classes or workshops on finances or some emotional wellness programs. When employees feel appreciated and cared for, they feel valued and tend to stick around longer.”

Johnson says employers need to do what they can to become an employer of choice and to enhance the employee experience. Whether it’s through having effective management teams, higher pay, more flexibility, an improved culture or offering a comfortable, modern workplace, she says businesses need to stand out from their competition.

“Businesses need to understand that the expectations of today’s employees are different. Not all employees are looking for that full-time, 40-hour- or-more hours per week opportunity. Work-life effectiveness is important for many — regardless of generation — to balance the many demands of their personal and professional lives,” Johnson says. “Employees are very much interested in and are asking for alternative work arrangements including a flexible schedule, part-time hours, job sharing, hybrid work environments and more.”

She adds some workers will take a job with lower compensation if it provides them with greater flexibility.

“Employers who are too rigid in their hours may scare off some potential job recruits since there is so much demand out there for workers,” Johnson says.

Workers also are looking to be inspired, whether it’s by a good leader or core values that help them feel like they are making a difference, Marklein says.

“Some businesses have their core values built into who they are and those companies not only tend to do well, they also keep their employees longer,” he says. “If you invest in your talent and take care of them, they will want to stay.”

Johnson says culture is essential in attracting and retaining employees. “When people leave their jobs, it’s usually because of a poor culture and ineffective leadership, not simply because of compensation.” she says.

“Organizations also need to showcase what makes them different — it is about the total employee experience.”