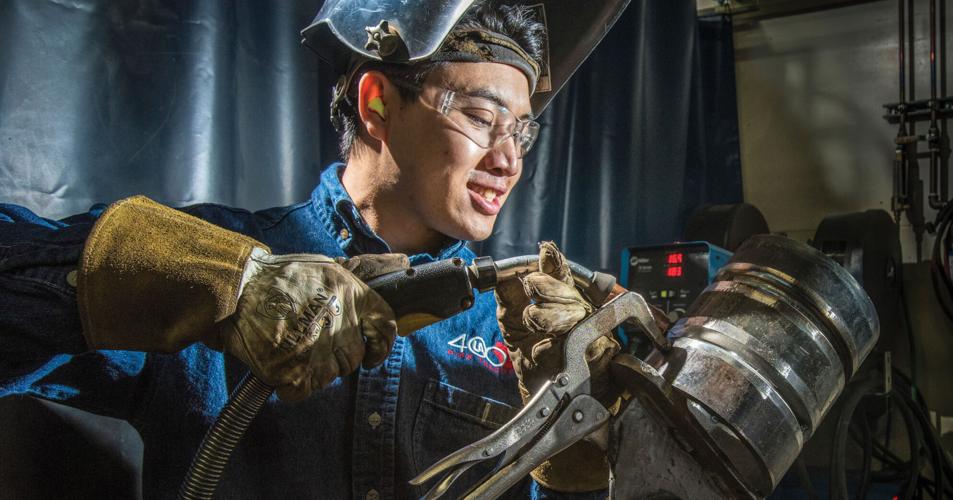 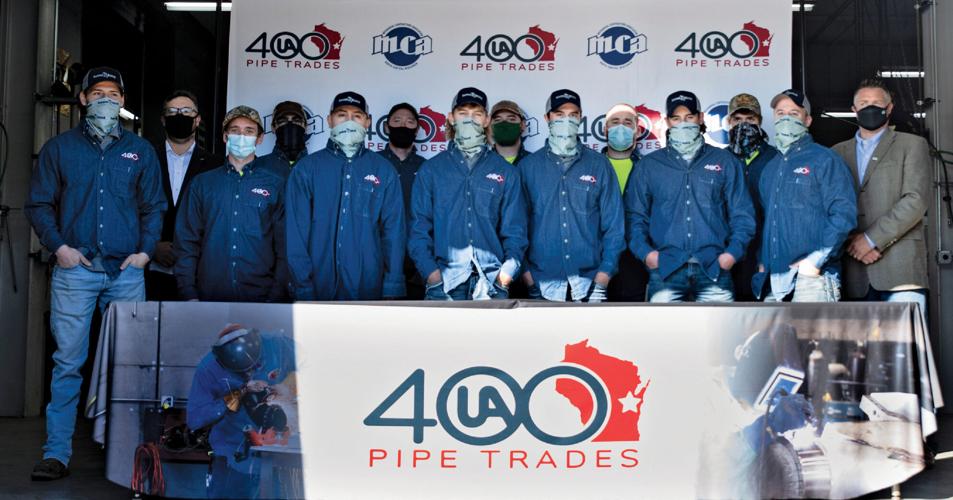 When Jim Eastman graduated from high school in the 1980s and became interested in the trades, he had to chart his own path. He joined the Navy and after his service, completed the training to become a journeyman millwright.

Later, when Eastman decided to become a tech ed teacher, part of what drove him was a desire to change the narrative about the trades and to help students who wanted to pursue a career in the field.

Trevor Martin, business manager for UA 400 Pipe Trades in Kaukauna, tells a similar story. He graduated from Appleton North High School in the late 1990s, and his school offered little in the way of tech ed classes. Students were pushed toward a four-year college path and heard nothing about the trades.

“If I had walked into my guidance counselor’s office and said I wanted to learn more about being a pipefitter, they’d have looked at me like I had a horn growing out of my head,” Martin says.

While Martin says knowing someone in the pipefitting field helped him break into the career he wanted to pursue, options were lacking even as recently as two decades ago. The industry suffered for it, and Martin is happy to see more pathways for students now, including the Appleton Area School District offering ATECH, a charter high school dedicated to kids pursuing manufacturing careers.

Similarly, at Menasha High School, where Eastman attended school and now teaches, interest in tech ed classes and apprenticeships is booming. “Those classes are bursting at the seams. Kids really want to take them because they’re hands-on,” he says.

For the district, which includes many kids from blue-collar backgrounds, offering pathways to the trades makes sense, Eastman says. Menasha High added another tech ed teacher this year and offers apprenticeship or co-op programs in welding, machining, carpentry, masonry, IT and graphics. Students also can take advantage of a dual credit program with Fox Valley Technical College.

Eastman says the school’s programs set up kids for success all while helping meet the needs of regional employers. “A lot of these kids come to me and say, ‘I don’t know what I’m going to do.’ All my apprenticeship kids know what they’re doing already,” he says.

Hannah DuCharme, a 2020 Menasha High School graduate, completed a youth apprenticeship program at Appleton’s Suburban Enterprises when she was in high school and thought she knew what she wanted to do when she graduated. She decided to attend a four-year university, only to discover the experience wasn’t for her, especially with the isolation she faced due to COVID-19.

DuCharme, who had continued to work for Suburban during the summer and over breaks, decided to return to the employer and soon landed a job as a prefabrication technician. While she may pursue schooling as a welder in the future, DuCharme doesn’t think she’ll go back to a four-year school. She credits her experience as a youth apprentice for helping her develop solid work habits and skills.

“It taught me how to balance a lot of things because between work (and school) and trying to hang out with friends, it was a good way to manage your time,” she says.

Scott Martin, training and development coordinator for Suburban, says many high school apprentices who work for Suburban stick with the company. Some decide to pursue other options, and either way — learning what you like or do not like to do — is a valuable experience, he says.

This year, Suburban is taking on six new youth apprentices, and Martin says it’s a vital strategy for the company, one that allows it to train young people and prepare them for a possible career at Suburban. He points to success stories like one past apprentice who is now a journeyman electrician in the industrial processes area and is looking at taking on a foreman role.

“For us, it’s finding those motivated individuals when they’re in high school yet. If they’re motivated to want a youth apprenticeship, typically they’re a motivated person to begin with, so they turn into great employees,” Martin says.

Kirk Kallio, director of human resources for Waupaca Foundry, says youth outreach is an important focus at his company as well. The manufacturer offers co-op, apprenticeship and internship programs, scholarships, and financial support for STEM programs, as well as presenting a Foundry in a Box program that shows students and the community what foundry work looks like — in a small-scale way.

Waupaca Foundry has offered co-op and apprenticeship programs for decades, and it tries to make the arrangements as flexible and fulfilling as possible for students. The company works around students’ school and extracurricular schedules and tries to place students together to build camaraderie. It’s also increased its offerings to include experiences in areas like IT, human resources, marketing and accounting as well as the trades.

“Waupaca Foundry and its supplier base requires a robust pipeline of skilled talent, and that helps keep not just us competitive but keeps the industry moving forward, and the benefit to students is we’re showing them a career pathway to not just a lucrative career but one that has longevity,” says Sara Timm, director of marketing for Waupaca Foundry.

Jeff Gaecke serves as executive vice president of the Mechanical Contractors Association, which works alongside UA 400 Pipe Trades and runs that organization’s training fund. The MCA and UA 400 Pipe Trades work with 90 high schools throughout Northeast Wisconsin to offer apprenticeship opportunities. In recent years, Gaecke has seen an uptick in interest.

“There’s a lot of really good careers out there and good-paying jobs, so we’ve certainly seen an influx,” he says.

Last year, the groups’ program brought in 37 youth apprentices, and nine of those chose to go on and enter the full apprenticeship program. During their time as YAs, students also become union members and get access to UA 400’s 61,000-square-foot training center in Kaukauna. It also offers a satellite training center in Fond du Lac.

The shift Gaecke has seen is powerful. In 2008, the average age of an apprentice was 24 years old, and many of those were individuals who had gone to college and then chose a different path. Today, an apprentice can start in high school and by the time they’re 22, become a full-fledged journeyman.

UA 400’s Martin says those who do go on to become journeymen can enjoy many benefits. Today’s journeyman wage including benefits is $65 per hour. Furthermore, at the age of 18, someone can expect to be in the workforce for at least 40 years, and by the time that worker retires, he or she could have a seven-figure pension.

Martin says the YA program is critical, given the region’s aging population, retirements on the horizon and overall people deficit. “You have to pull out all the stops to get your opportunities in front of as many people as possible,” he says.

One way Martin devised to elevate the work and commitment of YAs was to create an apprentice signing day event. The group held its inaugural event last year, and this year’s signing day is scheduled for Sept. 24.

Signing day is designed to emulate the pageantry of a student athlete signing a college commitment. While Martin doesn’t underestimate that accomplishment, he says the dedication of YAs is equally worthy of celebration.

“The people who enter a pipe trade apprenticeship program are important too. They build our community,” he says. “For a day, let’s show these new apprentices how important they really are.”