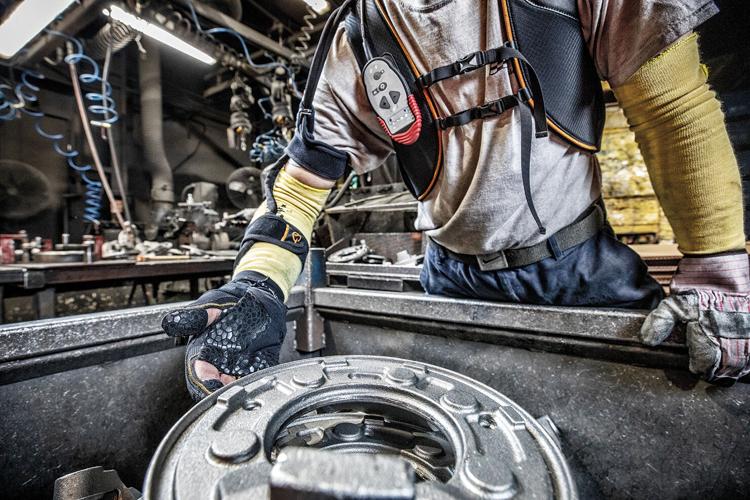 The Ironhand exoskeleton glove has been tested and used at Waupaca Foundry’s Marinette facilities since July. Company officials say the technology is a “bridge to automation.”

The Swedish company Bioservo has been on a journey to take a medical technology initially developed in 2006 for stroke rehabilitation and turn it into a revolutionary commercial product for the manufacturing industry. In its quest to put the product to the ultimate test, it found an ideal partner in Marinette.

Bioservo’s battery-powered “Ironhand” glove is a soft exoskeleton that increases the wearer’s hand strength by about 20%, helping factory and warehouse workers with efficiency and with mitigating chronic pain and injury associated with repetitive work.

The company has partnered with such heavy-hitters as NASA and General Motors, but now it’s putting the glove to the ultimate test at Waupaca Foundry.

“We realized we needed to develop the glove to withstand the foundry industry, which is the most difficult industry we know of,” says Frederik Ostrom, Bioservo’s North America regional sales manager. “Finding a partner like Waupaca Foundry gives us a chance to put the glove to the limits.”

Those limits include extreme heat and heavy materials, as well as iron dust permeating the air. Mikael Wester, Bioservo’s marketing director, says that if the Ironhand’s electronics can work in tandem with heat-protective gloves and withstand iron dust getting in them at the foundry, the product should work just about everywhere.

Wester says the goal of the glove is to directly mimic the hand and make tasks simply feel like easier versions of themselves. He says it has to be tried on to be believed.

“It has taken like 16 years to develop this, because it’s really difficult to mimic the hand’s movement so it feels natural to wear it,” he says. “You don’t want your workers to feel like they have to do something special from what they normally do.”

And since leveling the hand-strength playing field is one of the product’s greatest benefits, it has found a particular fanbase among women, Wester says.

Jon Loken, Waupaca Foundry’s director of safety and health, says the company is seeing exactly the employee response it was hoping to in piloting Ironhand.

“We’ve had a couple of situations where we outfitted a new employee with the glove right on their first day on the job, and then had them opt out of the program for a bit,” he says. “After a week of just using [manual] labor, they wanted back in because they said the difference was huge.”

One of those employees was a female working in the Marinette mill room, Loken says, adding that Waupaca Foundry expects the Ironhand to help not only with health and safety, but also employee satisfaction and retention.

The six-month, 30-unit pilot program ends in December, but Loken says he sees Ironhand enduring. He says more dangerous, labor-intensive jobs in the mill room have been the highest priority.

“Our thought was, if we could figure out the mill room the rest of the plant would fall behind. I look forward to deploying this to the rest of our facilities, because the feedback from our employees has been tremendous,” Loken says.

And while the factories of the future will no doubt lean increasingly hard on robotics and artificial intelligence, not every task can be fully automated.

“All our customers are trying to avoid manual labor, but there are certain things you can’t really automate,” Wester says. “You need some dexterity. There will still be a place for Ironhand.”

“The reality is, manual operations still outpace robotics,” Waupaca Foundry Marketing Director Sara Timm says. “Automation is not something that can be completed overnight; it takes time and capital. We have an opportunity to bridge the automation gap and improve these work environments [to] support team wellness and longevity. Enter the Ironhand."