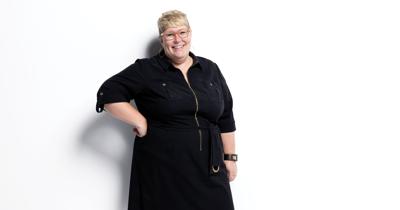 The idea for the Oshkosh Food Co-op, which opened its grocery store in late July, came from Bridgette Weber, a University of Wisconsin-Oshkosh student, about 10 years ago. She was interested in sustainability and after talking to a professor, they began looking at whether a food co-op would work in the community. A group of community members, including Brenda Haines, co-owner of Blue Door Consulting, came together to assess the idea. Insight talked to Haines, who is president of the co-op’s board of directors, about how the co-op went from an idea to a grocery store located at the corner of Jackson and Pearl streets in downtown Oshkosh.

What got you interested in forming a food co-op in Oshkosh?

Having grown up in western Wisconsin, I had seen food co-ops in La Crosse, Menomonie and some other places. I’m also familiar with the Willy Street Co-op in Madison. I thought it was a great idea for Northeast Wisconsin since there wasn’t a food co-op in the region.

We participated in a contest called the American Democracy Project — it was almost like a shark-tank kind of pitch contest where a few different community projects were presented. We shared our idea for the co-op with about 100 people who were there, and they voted that our project should win the top prize. We received something like $1,750 and we used those funds to write the bylaws for the organization and become an official entity.

For those unfamiliar with grocery store co-ops, how do they work?

You do not need to be a member to shop at the store, although members do get extra perks. We’re like other grocery stores, but we’re smaller and focus more on local foods and organic foods. Our vision is threefold: strengthen the local food economy by trying to source at least 20 percent of our goods locally, promote health, which is why we located in a food desert, and build community. As one of our board members said, we want the co-op to be the community’s kitchen table, where people feel they can gather — food has a way of bringing people together.

Co-ops are democratically controlled, so it means member-owners have a vote. They elect a board of directors to govern the store on their behalf. That helps ensure that the organization remains responsive to the needs of the community because the board is acting on behalf of the member-owners. Credit unions are an example of a co-op.

How did you bring the idea of a food co-op to reality?

Our bylaws were approved in 2013 and from there, we began looking for our first 100 founding members. We contracted with a national firm to provide market research on whether it could work, what size food co-op we could plan for and what type of location we should target. We knew we wanted to be in the downtown since it’s a food desert — an area that has limited access to affordable and nutritious food. The consultant told us that food co-ops that locate away from the central city may perform better, but what was really important to us was what could be financially feasible and also solve a community problem. We wanted more than a grocery store. We wanted an intervention. In 2015, we did a community survey and then after that, we really began to focus on adding member-owners. When we reached 750 member-owners, we launched a site team to research possible locations and make a recommendation for a location to the board. And then when we reached 1,000 member-owners, we announced the location and launched our capital campaign.

How did you become part of the Brio Building project?

When Merge started working on its plans for development in the area, we connected with them and began working together. The site was somewhere we were interested in. The whole project cost $2.6 million. We raised $1.6 million in owner loans, donations and grants, including a $145,000 grant from the U.S. Department of Agriculture to improve access to healthy and fresh food.

Now that the co-op has opened, what has the reaction been?

We had an incredible opening day. It’s a different kind of business opening since we have 1,800 owners. They were experiencing that sense of pride and ownership that they had helped make this happen. That was what I thought made it such a celebratory day.

Social isolation is such a big problem in our country, which was made worse by the pandemic, and we view the store as a place where people can shop, but also have the opportunity to talk to someone else. We have a checkout lane that is intentionally slow so the shopper can have a few more minutes to talk to the cashier. So, if you want to talk about sports, you want to talk about current events, you want to talk about the weather, whatever is that way for you to not feel rushed and feel you get that human contact. Some people go a whole week without talking to another person. We want to be part of the solution to that — we want people to feel more connected to one another.

We would love to see our co-op as both a successful grocery store and a place that has a positive impact on the Oshkosh community and across Northeast Wisconsin in terms of creating a market for local suppliers and creating healthy neighborhoods and helping build bridges within the community. We’re always driven to improve, so any notes or suggestions people have, we would like to hear them. We’re eager to learn and grow.

We may be the first grocery store co-op in Northeast Wisconsin, but I’m sure we won’t be the last. Other people have approached us and are interested in how it all works. Everyone is welcome to shop at the Oshkosh Food Co-op.